New Study Examines the TV Consumption Habits of Generations X, Y and i

(National Harbor, MD—November 9, 2011) – A new study released today, “Watching Gens X, Y & i,” paints a detailed portrait of 13-34 year old consumers and how they watch television: often while taking part in up to four or five activities all at the same time, from eating, cooking and cleaning to texting, surfing the web, emailing, playing games or listening to music.

“Many 13-34 year olds are multi-media multitaskers, but their social media activities vary depending on age group,” said Char Beales, president and CEO, Cable & Telecommunications Association for Marketing (CTAM), and head of the organization that commissioned the study.

Younger generations have been raised in an entertainment world where content is available anytime, anywhere and on numerous platforms. This study exposes what teens and young adults are watching, with whom they’re watching, where, how often and on what devices.

This research, conducted by C+R Research, was commissioned by the Cable & Telecommunications Association for Marketing (CTAM) to investigate the effect of lifestyles and life stages on media and technology usage of younger consumers. It included both qualitative and quantitative online phases in the summer of 2011, and also utilizes data from C+R’s comprehensive syndicated YouthBeat study to provide additional context. 2,124 total interviews were conducted as part of the quantitative phase.

At the Kid, Youth and Parent Power Conference in Florida last week, marketers, researchers and child advocates gathered to discuss trends and t 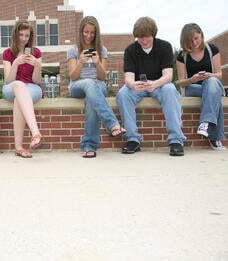 o share success stories. But they also came to engage in one of researchers’ and marketers’ favorite pastimes: myth bashing. On the doorstep of Disney, a place where fairytales usually prevail, speakers challenged the notion that teens rebel (according to MTV, Millenials prefer to game the system, not change it), that tweens and teens respond to mobile advertising, and that today’s parents just don’t understand (it turns out, they do).

We’ve engaged in a bit of this ourselves…On our YouthBeat website, you can find a link to our white paper on the “Six Youth Untruths,” and at the recent ARF conference, we shared a few fables about advertising to kids, tweens and teens.

Why do we take a swipe at hearsay and a cut at conventional wisdom so much? And what makes it so necessary to negate the notions that so many marketers have made into mantras?

So what’s a marketer or researcher to do? Scrutinize the sure-things – don’t accept that timeless ideas last forever. Embrace complexity – and if an insight feels a little too true, question and challenge it before applying it to your work. And finally, look to validate your hunches – especially the newest ones -  before using them to generalize the lives of your consumers or your audience.