Event coverage of the following session from the 2011 IIR Technology Driven Market Research Event (TDMR) in Chicago, May 2-3, 2011 #TDMR: “Crowdsourcing Your Research as Co-Creation” presented by Kevin Lonnie of KL Communications and Miguel Ares of Bloomberg.

As a fellow Fantasy Sports enthusiast, Kevin Lonnie and Miguel Ares’ TDMR presentation on the use of crowdsourcing a new fantasy football platform for Bloomberg Sports was like getting a backstage pass into the locker room of a big game. (Bloomberg is apparently a resource for much more than financial news!)

Crowdsourcing is an iterative ideation quali-quant method where a crowd is challenged to solve your problem, allowing market research to provide “illumination” rather than “support.” (This invalidates a quote by David Ogilvy involving drunks and lampposts).

Crowdsource the Issue, Weave the Narrative

With crowdsourcing, Kevin encourages the use of “crowdweaving”— the action of weaving the voice of the consumer into collaborative, challenge-solving initiatives.  An exemplary innovation model for crowdweaving is “Idea Sculpting,” where members are first asked to articulate their understanding of the challenge before they present their ideas for solving it.

As Kevin described it, “the race starts with everyone.”  They select the top 3-5 entries, and the challenge is to improve the concepts over a six-week process.  Good ideas transform into better ideas, until they find themselves at the threshold of a “Great Idea.”

Superior analytics have been the foundation for Bloomberg’s tools, including its Fantasy Baseball tool in 2010.  According to Miguel Ares’ from Bloomberg, however, player engagement and retention was not as high as expected.  The question was, “What is the level of satisfaction that the customer is really looking for in the world of Fantasy Sports?”

For Fantasy Football, the objective was to create a new platform to improve the user interface and experience with constant consumer feedback.  Crowdsourcing during game play was right on target!  Kevin also stressed that it is critical to involve all key stakeholders in the process so that the resulting ideas are shared and jointly owned. 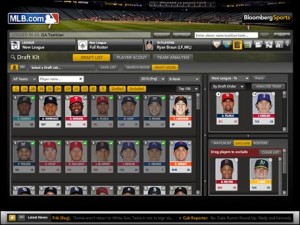 This begs the question: “How do we identify who we want to speak with?” Miguel suggests not to pick professional experts, per se, but instead to pick people who think highly of the brand and really want to make a difference.  The crowd works directly with the programmers and developers—an important step for the literal metamorphosis of the ideas—in order to articulate the final product.

The researchers were able to use the crowd to tell them what they needed, and the programmers streamlined the app and the Fantasy Sports experience with this real-time feedback.  According to Kevin and Miguel, “It was a bulletin board on steroids…  In this world, the crowd rules,” and in the end, Bloomberg wins and the customers win.